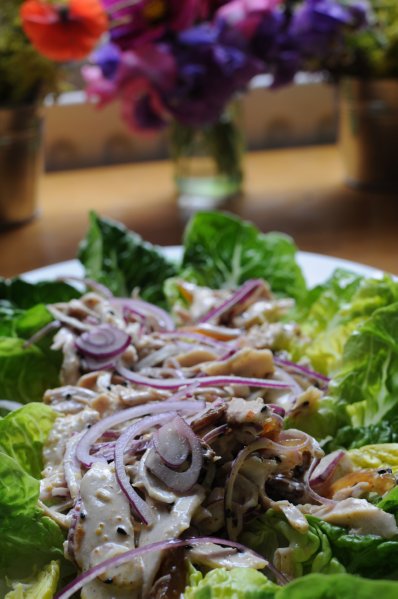 I have to admit I am a huge fan of Coronation Chicken in it’s many forms. In the UK, you can find a Coronation Chicken sandwich in most shops or deli’s. But the mayonnaise drenched version, that is often found, is very far from the original recipe that was created for Queen Elizabeth’s Coronation – hence the name!

The recipe below is a mix of a few that I found on the internet including Felicity Cloake’s How to Cook Perfect Coronation Chicken and Gordon Ramsay’s version. I adjusted them slightly but I did make my own mayo as both of the above suggest. I think that it probably adds a certain level of richness but I don’t think that many people would notice if you used Hellmans. I planned to use mango but Rich kindly went to the shops and came back with a very unripe one. Hence, the recipe below uses the traditional sultanas.

Yet again I seem to have written a recipe that has (what seems to be) a lot of ingredients. It is mainly the spices (as always) and these can be played around with. I would highly recommend seeking out the Nigella seeds (otherwise known as Onion seeds) as they add an original flavour and also look pretty. Summary: This makes a beautiful summer lunch. If you don’t have all of the spices below don’t worry, a decent curry powder should give you a nice flavour. I think that next time I will add more turmeric (one more ingredient) to add an additional yellow colour.

A really nice accompaniment to this is to boil new potatoes in the spiced, chicken cooking liquor. The end result is a delicately spiced potato which goes perfectly with the chicken and doesn’t need any butter!

This recipe has endless possibilities. I have only ever made it with leftovers before but I think that poaching the chicken adds another depth of flavour.